07 July 2021 Dealers saw average used car stocks fall for the sixth consecutive month this year to a new low of 39.9 units, down from 42.3 units in May and 40.8% below the pre-pandemic average of 67.5 units in June 2019, according to the latest eBay Motors Group Market View analysis. 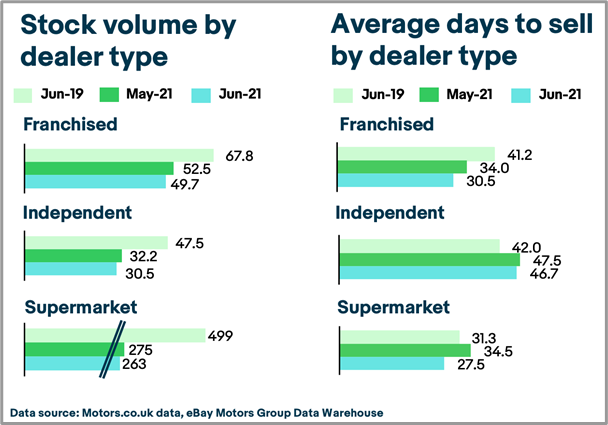 The sector-wide shortage of nearly-new vehicles meant car supermarkets were the hardest hit with stock levels tumbling 47% to an average of just 263 units, compared to pre-Covid levels of 499 in June 2019. This represented a month-on-month drop of 4.3% from 275 units in May.

Despite limited supply and continued consumer demand, average prices for the top 50 leading makes and models on Motors.co.uk dropped 1% from £12,149 to £12,024, following the 1.9% drop reported in May. This was the lowest average list price recorded in the first half of the year and represents a 5.7% drop since they peaked in April at £12,753.

Customer leads generated across the eBay Motors Group network since April remained on a par with the improved levels recorded during the first quarter.

"The widely reported impact of the wholesale shortage of used cars is being felt by dealers across all sectors with retailers struggling to restock to meet continued consumer demand," said Dermot Kelleher, head of marketing and research at eBay Motors Group.

"Another monthly drop in average list prices is unwelcome news for dealers, especially at a time when book prices continue to rise month-on-month, although this could be the consequence of retailers being forced to replace sold stock with older inventory.

Dealers will need to hold firm on advertised prices over the coming weeks or face the prospect of buying high and selling low," he said. 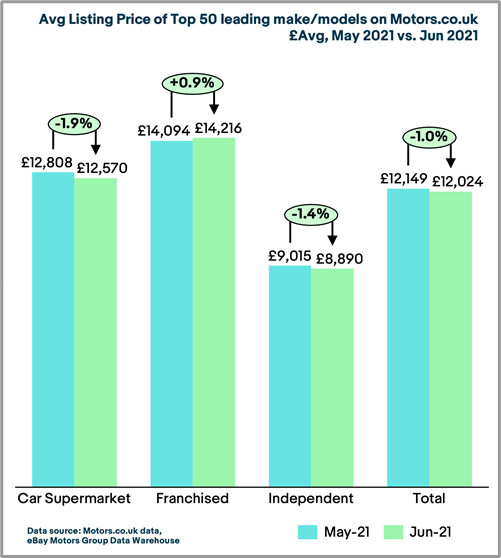 With fewer cars on their physical and digital forecourts, dealers sold them faster in June than at any point this year, averaging just 36.5 days in stock. The fastest sales were achieved by car supermarkets averaging 27.5 days, while independents took the longest at 46.7 days.

The fastest selling cars were found at the higher end of the price spectrum, with cars retailing between £15,000 and £40,000 averaging just 34 days to sell, faster than the 38 days averaged in June 2019. 4X4s lead the way, averaging 33 days to sell, followed by convertibles at 34 days.

"With travel restrictions still in place, limiting the opportunity for early summer holidays, some buyers in June chose instead to cash in unplanned savings on desirable off-roaders and sportscars, which was welcome news for dealers able to source them," said Kelleher.

Dealers in Northern Ireland sold cars faster than anywhere else in the UK, averaging 28 days (compared to 51 days in 2019), while the south west of England was the slowest selling region, averaging 50 days.

Diesel-engined cars were the fastest sellers by fuel type, averaging 34.8 days to sell, compared to petrol at 37.3 days, although overall stock volumes (43.5%) and internet views (43.8%) continue to fall.