Cost of living crisis set to impact majority of car purchases, with one in five being delayed 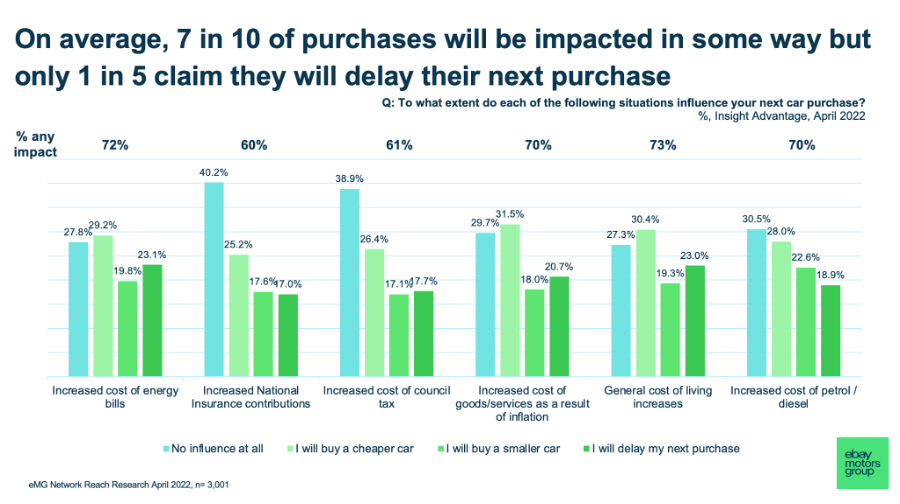 23 May 2022 - The cost of living crisis is having a significant impact on 70% of new and used car buying decisions as a result of the rising costs facing UK households, with one in five buyers claiming they will delay their next purchase.

The research, part of eBay Motors Group's ongoing Consumer Insight Panel, polled the views of over 3,000 in-market new and used car buyers during the second week of April, the week after energy regulator Ofgem's cap on energy costs was increased.

The rise in energy bills prompted nearly a quarter (23%) to say they will delay their next car purchase, while a further 29% will now buy a cheaper car and 20% will buy a smaller one. However, 28% say the rise would not influence their decision.

When asked how the general cost of living increases would affect their next car purchase, a similar trend emerged with 23% saying they will delay, 30% saying they will buy a cheaper car and 19% now looking for a smaller car. Over a quarter (27%) say it will not have any influence.

Although the rising cost of petrol and diesel will impact the decisions of 70% of buyers, most say they will go ahead and buy with 28% opting for a cheaper car and 23% a smaller car, while 19% will delay their purchase. However, 31% say these rises will have no effect.

The research also identified the limited impact of the rises in National Insurance Contributions (NIC) and council tax. Only 17% say they will delay their purchase because of the NIC rises, while 40% say it will have no effect on their plans. Similarly, just 18% say council tax rises will delay their next purchase, while 39% say it will have no impact. The balance in both cases say they will buy cheaper or smaller cars.

"Our research shows how the cost of living crisis is having a real impact on the decisions made by a significant majority of car buyers," said Dermot Kelleher, head of marketing and research at eBay Motors Group.

"While for most of these buyers it will mean a pragmatic shift to cheaper and smaller cars, which in itself may be challenging as advertised prices for used cars are still tracking up 20% YoY1, what is apparent is that one in five buyers will delay their next purchase.

"The challenge for dealers is to help buyers understand the overall affordability of their next purchase beyond the purchase price and how it can be balanced against their increased living costs.

"Dealers are ideally placed to advise on the lower running costs of some smaller and cheaper models and this will be appreciated by customers reining in their budgets and making some tough choices," said Kelleher.