4 October 2021 September saw the average advertised price of used cars jump by £822, the biggest month-on-month rise this year, according to the latest Market View from eBay Motors Group. 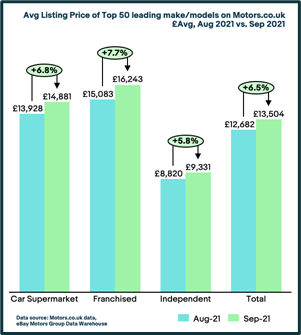 Increasing wholesale values, coupled with ongoing high consumer demand, saw strong advertised price performances for mainstream and prestige models with the average price of a Ford Focus (under three years old and with less than 30,000 miles) seeing its average monthly price rise 4.4% to £17,249, representing a £2,847 increase since January and an astonishing 21% increase year-on-year.

"Through September we can see evidence of dealers across all sectors holding firm on their advertised prices, an absolute necessity for those who paid the going rate at wholesale where values have been rising for several months. On Motors.co.uk we've tracked a rise in retail prices since June and expect this to continue into Q4 and possibly beyond."

Ongoing pressure to replenish forecourts continued with average stock volumes dropping to 36.9 units, compared to 38.3 in August and down 20.6% on 46.5 in September 2020. Independent dealers saw stock volumes most significantly down year-on-year, by an average of 7 units per forecourt (-21%), followed by franchised dealers who saw a 14% decline on average. 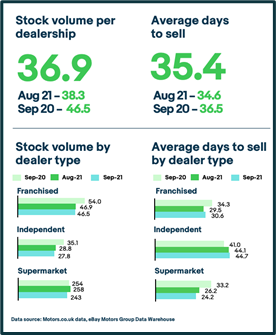 Average days to sell increased slightly month-on-month from 34.6 to 35.4 days.

The fastest selling car was the Ford Edge, averaging just 20 days on dealer forecourts. Followed by the MG ZS (21.8 days) and Kia Sorento (21.9 days), as compact and large SUVs continued to dominate the top 10 fastest movers on Motors.co.uk.

Diesel continued to be a fuel to be reckoned with on the used market, accounting for 43.8% of all dealer stock, 45.1% of online views and averaging just 33.3 days to sell.

Hybrids and electric cars made up the balance of dealer stock volumes with days to sell averaging 39.2 and 48.9 days respectively.