17 September 2021 The shortage of used cars saw dealer stock levels drop once again in August, with high demand driving up prices for the fourth month in a row, according to the latest Market View from eBay Motors Group.

Franchised dealers and car supermarkets felt the pain of reduced availability with average stock levels down 8% month-on-month to 47 units and 5% to 259 units. Meanwhile independent dealers, already trading at low levels, saw no month-on-month fluctuation at 35 units.

Average stock levels across all dealers were down 5% month-on-month from 40 to 38 units in August, equating to a 34% fall on the pre-Covid level of 58 units in August 2019.

The continued strength of consumer demand saw cars selling almost four days faster than in July as average days to sell fell to their lowest level of the year at 34.6 days. 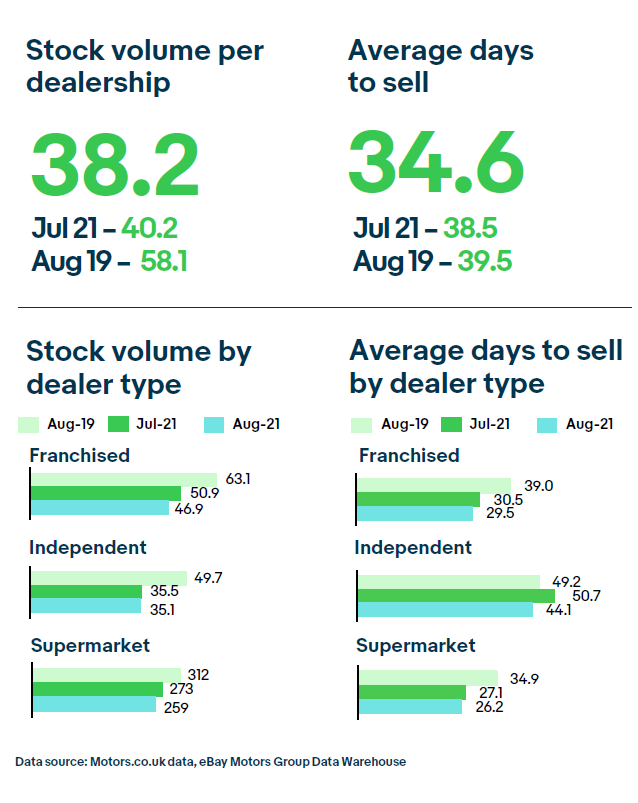 This demand coupled with rising wholesale values pushed up the average price for the top 50 makes and models on Motors.co.uk by 1.5% to £12,511.  Average advertised prices have now risen every month since May. 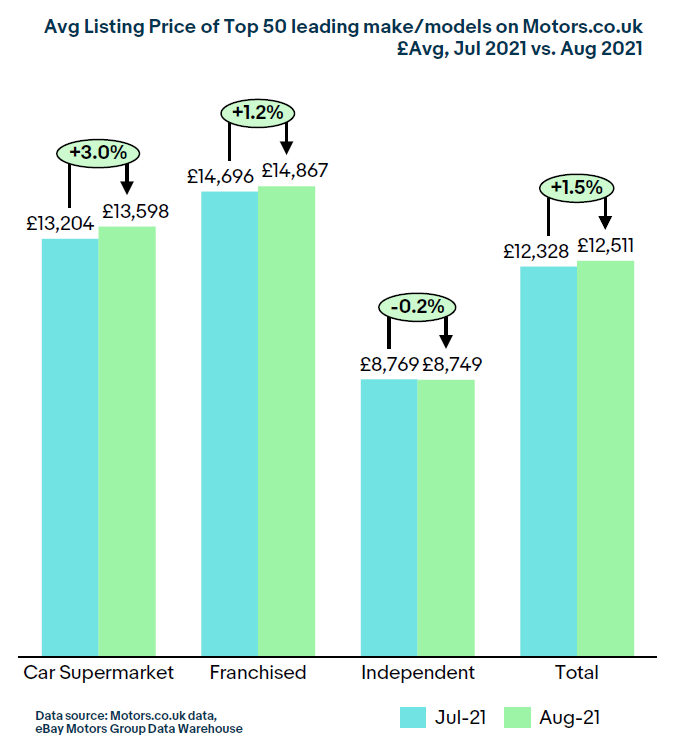 This relatively modest average increase in retail pricing could be the consequence of retailers being forced to replace sold stock with older inventory. Indeed, when tracking price movements at a specific 3-year,  30,000 mile make and model level, there is evidence of much more substantial price increases, including an 18% year-on-year rise for the Ford Focus at £16,528, with average prices rising 5% month-on-month and increasing £2,126 since January, while the average price of the BMW 3 Series increased 14% year-on-year to £25,501, a 1% month-on-month increase and a rise of £2,832 since January.

"Reduced supply into the used market and high consumer demand are resulting in cars selling faster and for higher values than dealers have ever seen. While this may create profit opportunities for dealers, the downside is dealers are feeling the pain of being unable to restock as they would want, potentially frustrating customers who can not find what they are looking for or having to make do with what is available," said Dermot Kelleher, head of marketing and research at eBay Motors Group.

"With wholesale prices tracking at historically high levels, dealers appear to be sticking to their guns on pricing with some of the fastest selling cars costing from £10,000 to £40,000 and averaging just 32 days to sell. This suggests some buyers are giving up on long wait times for new cars and searching out used alternatives and paying more for them.

"Over the coming weeks and months dealers will need to maintain a strict focus on their digital marketing activities, especially as many will be sourcing cars outside of their typical price, age or brand profile. Even though demand is high, they will still need to reach as many in-market online buyers as possible, rather than rely on regular or local customers. With finding the right car becoming increasingly difficult due to stock shortages,  buyers will be more prepared to travel further afield to buy," he said.

Although petrol remains the most searched for fuel type and accounts for half of dealer stock volumes, diesel cars sold faster at 32.6 days, compared to 35.8 days for petrol, suggesting a better supply and demand ratio as dealers move to reduce their overall diesel stock.

Hybrid cars averaged 36.6 days to sell in August and electric cars 49.7 days, although accounting for just 2.5% and 1% respectively of stock volumes.